Blogging From A to Z: Kisses 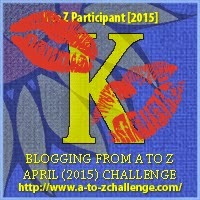 K is for Kisses
Some of the kisses are 18+

“No problem.” Nick kissed her on the nose and headed to the connecting door. It was unlocked. “You mean I could have gone in and had my way with you earlier?” Nick had a wicked grin on his face.
-A Saint's Salvation

Releasing her nipple, he kissed his way down her body. He moved between the juncture of her thighs. Spreading her lips with his hands, he exposed her secrets to his view. He leaned forward and ran his tongue through her softness, stabbing into her heat. She groaned. He raised his head and placed a kiss upon her throbbing clit, flicking his tongue on it as he did. She squirmed beneath him. He stopped and sucked her clit into his mouth. She bowed and screamed.

He loomed above the bed, and the silver of his eyes gleamed like moonlight as he stared down at her. His mouth descended. That kiss took her breath: the feel of his lips as they shaped hers, soft and determined. The trace of his tongue demanding sweet entrance sent a wave of heat throughout her body. She yearned to deepen the kiss. She didn't dare.
-Touched by the Sandman

I have more kisses coming!
In Love Me Forever
and
Stealing Hope A Dragon's Fated Heart

Posted by Happily Ever After One Book at a Time at 12:00 AM

Email ThisBlogThis!Share to TwitterShare to FacebookShare to Pinterest
Labels: A Saint's Salvation, A to Z Challenge, kisses, Lightning Strike, Touched by the Sandman