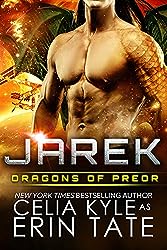 What’s hotter than an alien with scales? An alien with wings and scales, not to mention a hot body.

At 457 Preor years old, Jarek sen Claron is a dragon ready for his final flight into the skies. This voyage to Earth as the War Master of the third fleet will be his final assignment. Once he has helped his fellow Preors secure human mates, he will return to Preor before the madness of loneliness overtakes his mind.

That all changes when he meets Melissa. Human Melissa with her sparkling eyes, bright smile, and body that would make any hot-blooded male drool. Unfortunately, she never registered as a Preor mate hopeful. No matter, the Knowing stretches between them and there is no way she can resist him. Until she does.

Jarek wishes to give her the choice to mate him, while everything inside him screams to take Melissa beneath his wing, now. No choosing necessary.

But should he draw her to his side when his enemies are circling? Many males do not believe the son of a Preor mass murderer deserves to have a mate. Can he survive the coming battles? Or will he die without tasting sweet Melissa’s lips?

Jarek is the ultimate War Master. Strong, determined, stoic, HOT. Nothing will bring him to his knees. Except his mate, the soft kindhearted nanny, Melissa. He hadn't gone to Earth to find a mate but fate had other ideas. The sound of her laugh sent the knowing rushing in. Overcome, the happiest event turned to the deadliest. And so their tale begins.
Posted by Happily Ever After One Book at a Time at 10:09 AM