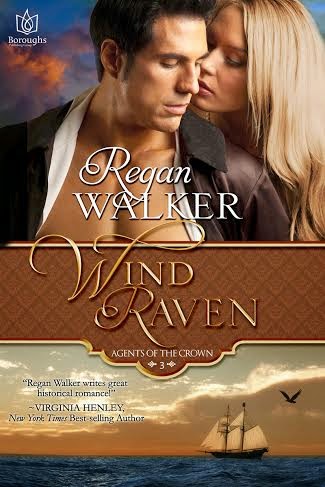 Ordered by the Prince Regent into the Caribbean, English sea captain and former privateer Jean Nicholas Powell has no time for women onboard the Wind Raven, especially not Tara McConnell. The impudent American forced herself aboard, and so she’ll get more than she bargained for: Instead of a direct sail to Baltimore, she’ll join their quest to investigate a rampaging pirate, the infamous Roberto Cofresi.
But the hoyden thinks she can crew with his men, and though he bans her from the rigging, Nick is captivated watching her lithe, luscious movements on deck. Facing high seas, storms, cutthroats and the endless unknown, he must protect his ship, his passenger, his crew. But on this voyage, with this woman, there is a greater danger: to his heart.
Links: 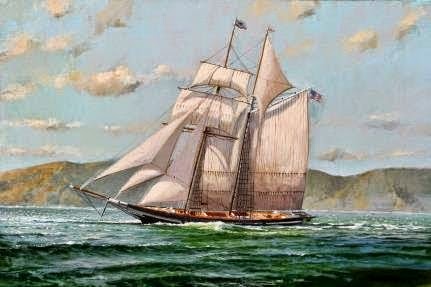 What inspired the story:

I have always loved sailing ships and the sea. And the challenge of setting a story on a ship called to me.  To get the feel of a Regency era schooner, I even took a ride on the Californian, a reproduction schooner berthed in San Diego where I live. When Capt. Jean Nicholas Powell was introduced as Sir Martin's older brother in Against the Wind (book 2 in the Agents of the Crown trilogy), it was clear that Nick's own story would be a different kind of Regency--a seafaring adventure much of which would take place on his schooner. I wanted to write a story that told about what the British were doing in 1817 who were not in London and I wanted to feature an American heroine who would still be licking the wounds of the War of 1812. And, of course, there had to be a pirate--and the one in Wind Raven is a real historic figure.
Excerpt:

Captain Jean Nicholas Powell stepped from the oppressive Caribbean sun into the dim light of the familiar dockside tavern, pausing for his eyes to adjust to the darkened room. Sweat dripped from his forehead, and he wiped it away with the back of his hand. Swallowing, his throat felt as dry as the dock he’d left baking in the sun.


Tobacco smoke hung in the hot, still air, so thick it obscured the tankards on the shelf behind the bar and the faded painting of a nude woman hanging above it. Casting a glance at the men who leaned against the counter nursing their drinks, he noted the man he searched for was not among them.


Striding from the bar, Nick weaved his way through the tables crowding the long, smoke- filled room. The sharp smell of tobacco, though familiar, made him regret there were so few windows. Some of the other captains looked up as he passed, their eyes acknowledging him as one of their own.


“’Lo, Nick,” said Latimer, an English merchantman. “’Bout time you were joining us.”


His eyes still searching the room, Nick said, “Had an appointment at the dock. I’ve been desperate for a drink for nigh on an hour. Seen Russ?”


“Think he came in earlier. Might be in the back.”


A buxom redhead approached Nick with beckoning eyes. He recognized Molly, one of several wenches employed by Amos for the pleasure of those who patronized Esmit’s Tavern.


“What would you like, Cap’n?” The invitation in her smile and the shoulder bared by her low bodice suggested she was offering more than drink.


A familiar shout of “Captain!” from the rear of the tavern drew Nick’s attention to the blond head of his first mate, Russell Ainsworth.


He resumed his path through the tables of drinking men and serving wenches, their conversations a dull roar, the stink of sweat and rum blending with the tobacco to assail his nostrils. Reaching the table where Russ sat alone with a tankard, Nick slid into the unoccupied chair as Molly delivered his rum and another smile. Lifting the tankard, Nick took a long draw on the lukewarm liquid. At least it was wet.


He wiped his brow on his sleeve and inquired, “Is all in order on the Raven?”


“It is. Wasn’t pleasant, though. Last night’s revelries are taking their toll. There were a few dropped crates and the netting for one load tore free, leaving one of the crew tangled in the ropes.” At Nick’s raised brow, Russ added, “But she’ll be ready to sail on the tide. Did you have any success finding a bos’n?”


Nick threw back another swallow of the sweet liquor and let out a sigh. “I did. A big Swede named Johansson. You might remember him from a fight last time we were in port. The men said he fought like a gentleman but with fists of iron. When we lost the bosun last run, they suggested his name to me and said he might be in port today. I thought it would be good to have him on our side given the waters we sail. And it seems he’s anxious for a change.”


Nick looked around, taking in those men he didn’t recognize. At the next table two tawny-haired Americans argued with three hardened seamen. The older American’s clothing and his air of command suggested he was a captain of an age with Nick. The conversation of the five men, who were clearly in their cups, grew boisterous, their disagreement apparent to any near enough to hear above the din of the crowded tavern.


Out of the corner of his eye, Nick watched the American captain raise his tankard in toast. “A drink to our sister, one of the finest crewmembers ever to sail aboard my ship!”


The other American, nearly identical in appearance and with the same tawny hair, clinked his mug against his brother’s, the rum sloshing onto the table. “That she is, George!”


The old salts looked doubtful but nevertheless joined in what was obviously one of many toasts. “If’n ye say so, Cap’n George, but I’ve never been easy with such meself. Don’t like sailin’ with women,” he said with a sneer. “Them’s trouble. The captain I sail for would have none of ’em on his ship.” His compatriots mumbled their agreement but took up the toast and, with dazed expressions, cheerfully quaffed their rum.


Nick shuddered as he tried to imagine what a woman would look like who crewed with men. One of those damned Yankee women, no doubt. Like most captains, he’d have no females among his crew. Passengers only occasionally and even those presented a risk. On rare occasions, he might invite an English girl with creamy white skin or a tanned island beauty with dark gypsy eyes aboard the Raven. But neither served as crew and neither sailed with them long.


With one pint of rum in his belly, he greeted Molly’s return to their table with a smile and pulled her onto his lap. “There’ll be no hag in the rigging on the Raven. I prefer only beautiful women and those in my bunk, not swabbing the deck.” He glanced at the smiling Molly, whose bountiful breasts were pressing against his chest. “Seems the right place for a pretty lass, don’t you agree?”


“You can take me on yer ship anytime, Cap’n Nick,” purred the redhead.


Russ gave out a chuckle, and the American captain threw Nick a fierce gaze. With narrowed eyes and slightly slurred words, the tawny-haired captain pushed back his chair and stood to glare at Nick.


“You don’t know our sister, English, so you can keep your views to yourself.”


Nick set Molly aside and slowly rose from his chair. “I have no opinion of your sister, my good man, but if it’s a fight you’re looking for, I’ll not turn aside a challenge.”


The younger American tugged at his brother’s shirt. “George, leave off. It’s too hot to fight.”


Ignoring the caution, the tall American captain leaped across the small distance, and with speed that belied his condition, slung his fist into Nick’s jaw, nearly knocking him off his feet. Nick shook off the pain, shoved aside the table and threw a hard punch into the American’s ribs.


The American fell backward, knocking over another table with a loud thud. Tankards of rum flew in all directions, splashing the liquor on those sitting nearby. Curses rose in a loud crescendo as the observers, doused with rum, stepped aside.


“Get Molly out of here, Russ,” Nick ordered his first mate, who hastened to usher the barmaid out of the way. Nick and the American circled each other. The men in the tavern cleared a space around them and, shouting encouragement to their favorite, placed bets in what was quickly becoming the afternoon’s entertainment.


“Two quid on the American!” shouted one. “Five on Cap’n Nick! I’ve seen him fight.” Fists flew, and feeling the pain from another gut punch, Nick realized it might be some time before he could defeat this man, who, even foxed, was very much his match. Resolved, he slammed his right fist into the American’s jaw, sending him to the floor.


Nick braced himself for the next round as the American picked himself off the floor, but the bartender stepped between them.


“Ye can take yer fight outside, captains,” said Amos, with his fists on his broad hips and a scowl on his round face. “I’ll not have me tables broken.”


Nick dropped his arms to his side. “Sorry, Amos. Was just a misunderstanding between...ah...friends.”


The American captain’s blue-green eyes glared hatred, but his brother whispered into his ear and pulled him back to his seat. The men who had gathered around, seeing the fight had come to an end, ambled back to their chairs, mumbling words of disappointment as their bets were returned.


“Nick,” whispered Russ, ‘the last thing we need is a fight with an American. The war is over, remember? And England has declared St. Thomas a free port.”


Russ was right. As a merchant captain, Nick looked forward to the lucrative trade peace would bring. Holding his hand over his heart, Nick dipped his head in grand gesture to the Americans. “My apologies, good fellows. Never meant to insult your sister. I like women just fine, though I prefer them in my bed and not cluttering up the deck of my ship.”


The older American’s thunderous expression told Nick that, notwithstanding his apology, he’d made an enemy. He hoped he would not see the American again soon. Dropping some coins on the table Russ had righted, Nick and his first mate left the tavern, a question rumbling in his mind.


What kind of a woman would crew with men? 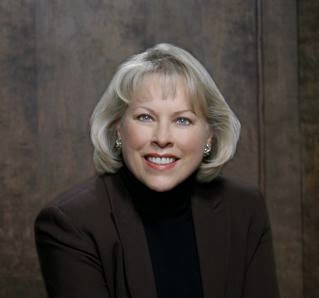 As a child Regan Walker loved to write stories, particularly about adventure-loving girls, but by the time she got to college more serious pursuits took priority. One of her professors encouraged her to pursue the profession of law, which she did. Years of serving clients in private practice and several stints in high levels of government gave her a love of international travel and a feel for the demands of the “Crown” on its subjects. Hence her romance novels often involve a demanding Prince Regent who thinks of his subjects as his private talent pool.

Regan lives in San Diego with her golden retriever, Link, whom she says inspires her every day to relax and smell the roses.