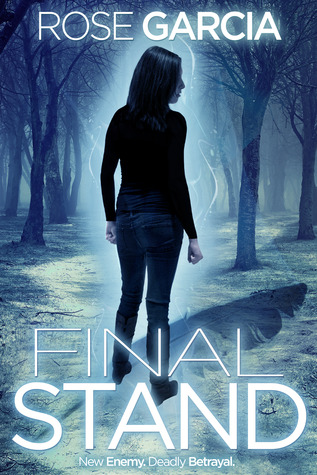 Dominique is still alive after killing Tavion, the Tainted who's hunted her for lifetimes. Yet her protectors still fear for her life. They force her to flee Houston and abandon the friends she loves. But they can't protect her from herself. When Dominique starts hearing Tavion's voice in her head, she realizes that her personal connection to the Tainted still exists. And when her car is ambushed, she discovers another frightening truth—someone close to her is a traitor.

Desperate for answers, Dominique seeks the aid of first lifers Trent and Infiniti. With their help, she hopes to find her new enemy. But things get complicated with Trent because of her emotional pull toward Farrell, and even more complicated when the whispers in her head threaten her loved ones. Determined to live, Dominique decides to make a final stand against the forces that want to end her. For good.

Rose Garcia is a lawyer turned writer who's always been fascinated by science fiction and fantasy. From a very young age, she often had her nose buried in books about other-worlds, fantastical creatures, and life and death situations. More recently she's been intrigued by a blend of science fiction and reality, and the idea that some supernatural events are, indeed, very real. Fueled by her imagination, she created The Transhuman Chronicles--a series of books about people who have overcome human limitations.

Rose lives in Houston with her husband and two kids. You can visit Rose at www.rosegarciabooks.com

a Rafflecopter giveaway
Posted by Unknown at 9:00 AM