Because of Jacqueline by Cynthia Pomranz

Because of Jacqueline – How I came up with the idea for the plot.

Have you ever seen one of those TV commercials for an Internet dating website with a man and woman who met online, and are now in wedded bliss?  My husband and I could be that couple. I still tease him that my online dating membership was the best $29.99 I ever spent! The day after I decided to dip my toe into the Internet dating pool, I received an email from my future spouse, and the rest as they say…is history.
But I quickly realized we aren’t an anomaly when I began to ask people how they met their other half.  I discovered co-workers, friends, and family members who are happily married today, as a result of a cyber relationship.  Curious, I researched online dating and found some startling numbers on Statistics Brain.  As of January 2014, there were 54,250,000 singles in the US and 41,250,000 of them have used online dating.  That’s a whopping 76%!
Since so many people are falling in love via the Internet, I thought readers would relate to a heroine and hero who meet online. The idea for my sexy contemporary romance, Because of Jacqueline, was born.  To make things interesting, I decided to delay their first date. Jackie must travel out of town for work. The couple spend the next two weeks in a tantalizing state of limbo filled with emails, texts, and phone conversations that go on seamlessly for hours.
Even though they have never met, their souls touch.  The story taps into our desire to find one person who will love of us for who were are, not just our outward appearance.   The conflict arises when they meet and their relationship changes. 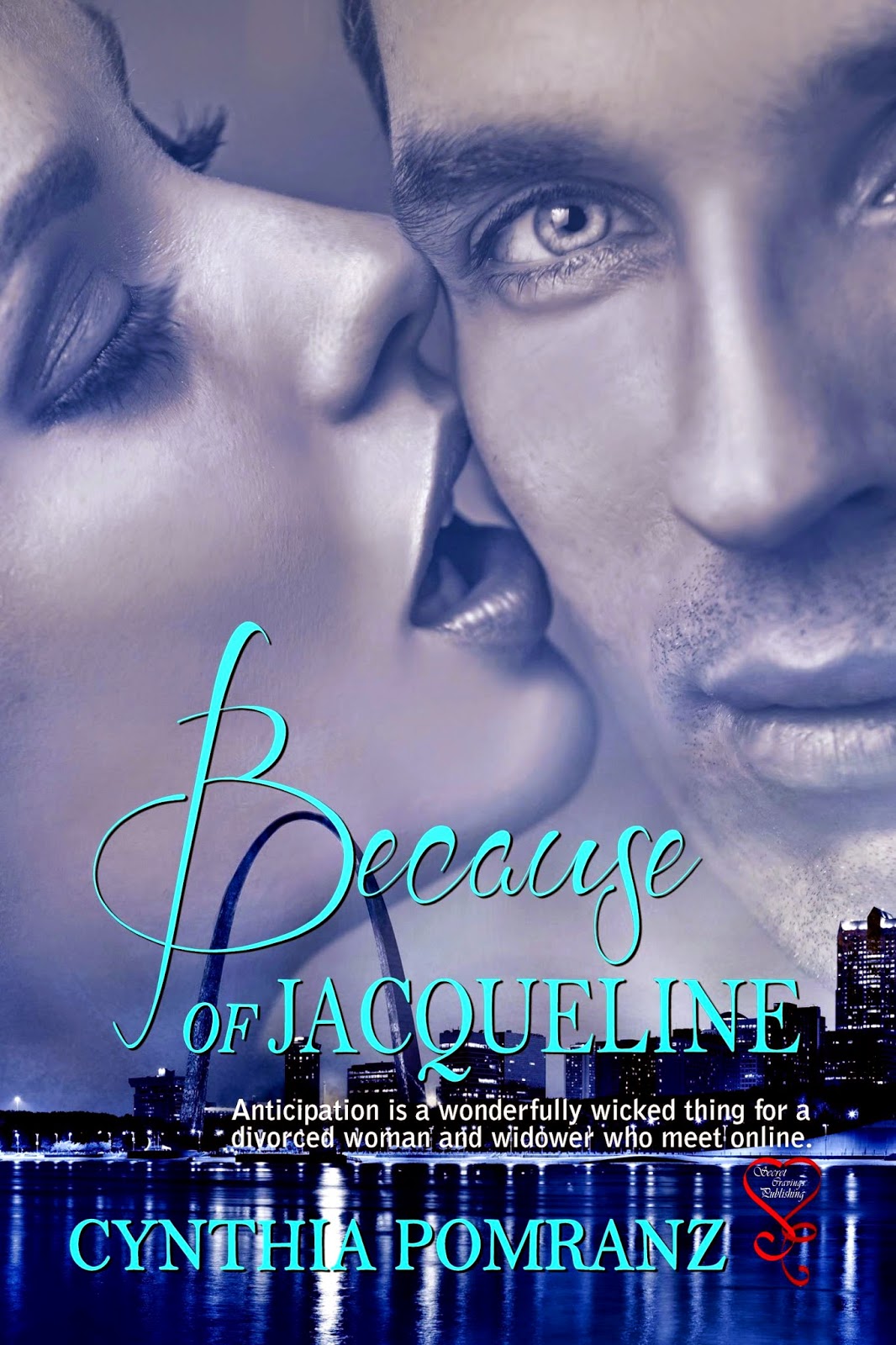 Jackie Simms moves back to her hometown, St. Louis, to rebuild her life in the wake of divorce, including a foray into the world of online dating. She responds to an intriguing email from Marc Montgomery, who shares many of her interests, as well as a love for baseball. As their cyber relationship deepens, her skeptical side wonders if he’s too good to be true.

When Jackie’s work-related travel delays their first date, the couple spends the next two weeks in a tantalizing state of limbo filled with tender emails and intimate phone conversations that go on seamlessly for hours. Even though they have never met, their souls touch.

When they finally meet, will Marc be Jackie’s dream come true?  Will she learn the truth about this enigmatic man?  Will self-doubt lead Jackie to believe she is the barrier to her own happiness?

The martini tasted delicious. And potent. The drink went straight to my head at the first sip. Minutes later, Marc joined me in the living room.

“This sofa is comfortable and good looking.” Not as good looking as the owner. His polo shirt clung to his well-defined chest. Obviously, he worked out on a regular basis.

“After I had the house rehabbed, I worked with a friend of my mom’s. She decorated the whole place.”

“Impressive.” I murmured, thinking more of him than his furnishings. The gin continued to fog my brain. My plan to remain cool toward him became a distant memory.

After we finished our drinks he asked, “Hungry?”

“Yes, some food would be good.” I needed something to soak up the alcohol.

My attention went to the opposite wall. “Marc, what is the size of your flat screen?” I’d never seen anything comparable.

“On a gianormous screen.” I giggled.

“Gianormous? That’s a word I haven’t heard.” He looked bewildered.

“I picked it up from my girls. It’s a combination of giant and enormous. Teenagers have a unique way of expressing themselves.” I chuckled to myself.

“Your martini seems to be agreeing with you, Jacqueline.” His smile widened.

I took the opportunity to look for the lower front crooked incisor he mentioned, but I couldn’t see anything except perfect teeth. The buzz in my head intensified. My eyelids started to droop.

“I’ll get the food. Can you get a couple of waters from the fridge?”

“Sure.” I tried to steady myself. I never should have had a drink on an empty stomach.

“We have egg rolls, wonton soup, and Mongolian Beef, light on the onions, as you requested.”

Thankfully, as we ate, I began to feel more coherent. Yoake sat curled up on her floor pillow nearby as Marc updated me on his acquisition plans with the internet company. He seemed pleased when I shared with him my daughters were coming for a visit. This evening is starting out much better than last week.

After dinner, Marc produced his movie collection list. “Take a look. Tell me what you’d like to watch. They’re arranged by genre in alphabetical order.”

I stared at the list in awe. “There must be over five hundred movies here.”

“Glad to see you are cutting back,” I teased.

“What’s your pleasure? An old classic, a drama, action, or maybe sci-fi? I’m guessing you’re the romantic comedy type.” I could only see his blazing blue eyes over the top of the list.

“Do you have any recommendations?”

“Last week I bought Hitch with Will Smith and Eva Mendez. Have you seen it?”
“No, I haven’t. Let’s watch it.”

Marc started setting up the DVD.

I wonder how many other women have been to his place for Chinese and a movie. He had been single his adult life, while I’d been married. I remembered what Trish said to me about STDs and using condoms.

I certainly wasn’t planning on having sex with him, but it felt incredible when he kissed me last week. Marc took a seat next to me on the sofa. His inviting scent was clean and fresh with a note of spice.

“Can I get you something to drink?”

“Yes. You are,” his eyes glimmered as he stroked my arm. A shiver ran down my neck and across my shoulders. His lips brushed mine. The quivering spot in the pit of my stomach exploded.

As Marc pulled me in his arms, he kissed me softly. When his warm tongue pressed into my mouth, a combination of panic and burning desire ripped through me. My lips couldn’t deny his moist, sweltering kiss. He stopped and took my hand. Without saying a word, he stood and led me out of the room down the hallway.

I knew where we were going. Yoake trotted along beside us swishing her tail, as if she knew too. Looks like this isn’t the first time Yoake has accompanied someone to Marc’s bedroom. She ran ahead and nosed open the door. The late summer sunset lit the room in a soft, warm glow. A king size bed with a tall, fawn-colored upholstered headboard and button tufting dominated the large space. The soft neutral toned bedding appeared to be a sumptuous raw silk.

Marc stopped a foot from the bed. He wrapped his arms around my waist and kissed me. Slow and deep. All the blood drained from my head. The air in the room became thick. When he pulled my T-shirt over my head, the heat from his body blanketed my bare skin. With ease, he unsnapped my bra with one hand and dropped it to the floor.