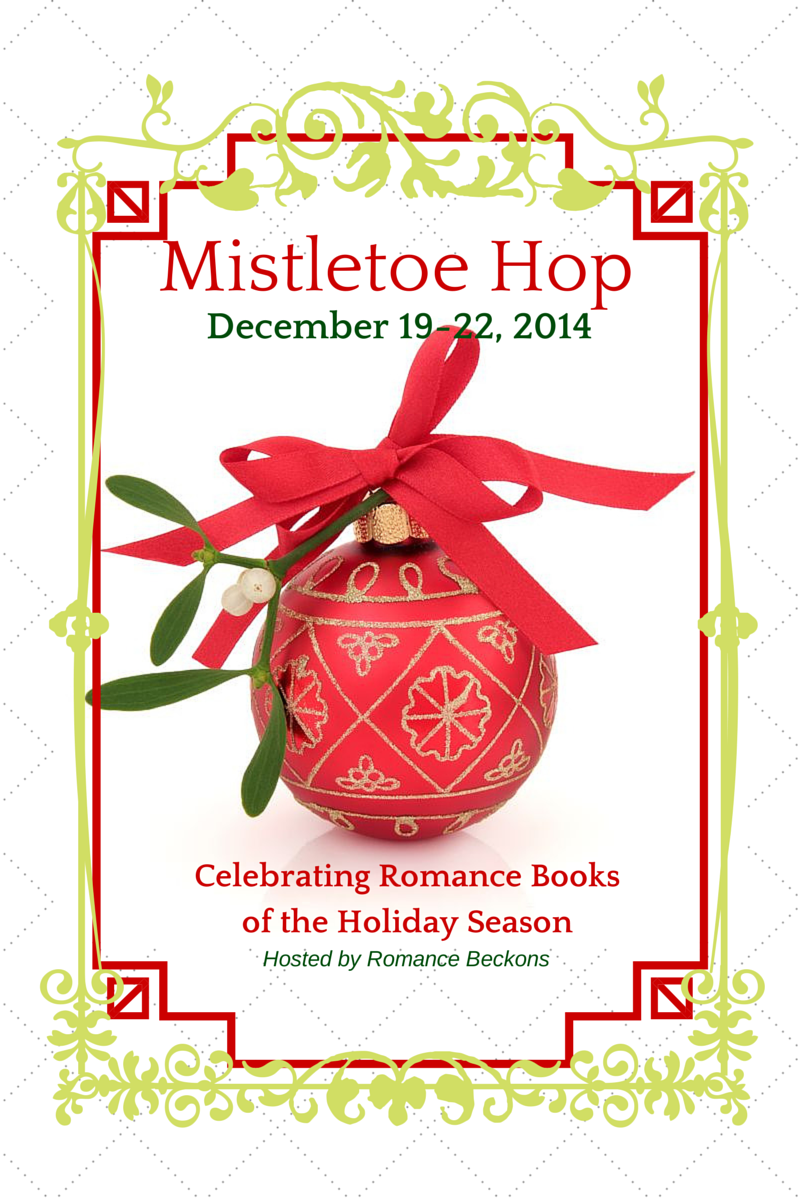 Christmas is a time of love! Celebrate the Season with tales of love and romance.

Looking for Christmas gifts? Give a book!

Well, Mistletoe is all about the kiss, isn’t it?
Here's a peek at a few... kisses. 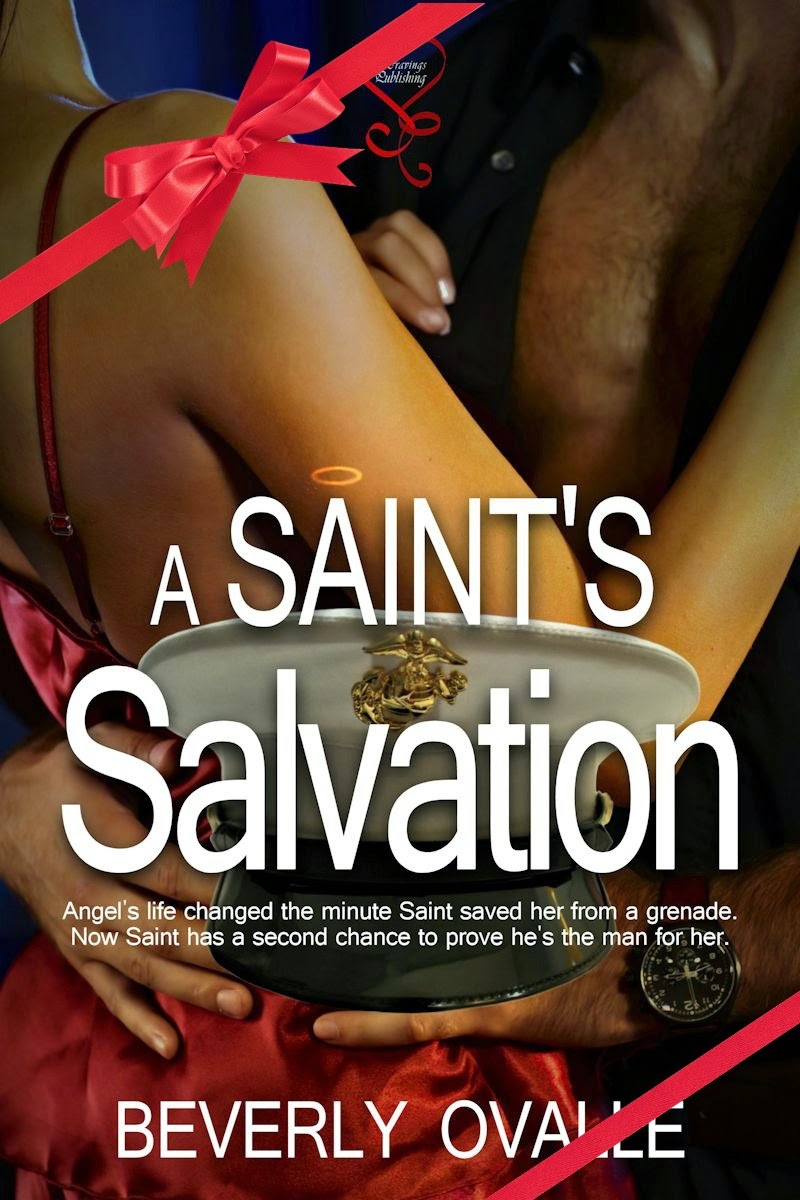 Corporal Nicholas 'Saint' Santiago needs to go home to reclaim the man he used to be. To be the man he was before Operation Enduring Freedom slowly hardened his heart. He needs to reconnect to the values and the reasons he is doing what he does. Saint also needs to try to forget the courageous woman he knows was meant to be his.

Petty Officer Angelina Jones' life changed the moment Saint saved her life. She survived the blast but now has to deal with the fact that she will never be whole. Knowing Saint received a 'Dear John' letter, Angelina has no intention of being his rebound romance. She needs to be loved for herself. She needs to forget about the one man she knows was meant to be hers.

They each try to find someone to help them forget.
But what does fate have planned for them?

Tine suddenly leapt up and licked her from head to toe. Ew. Brand followed suit and licked her too, evidently not to be outdone. Ugh. Now she was wet and sticky all over. Glaring at them, she stripped and dove into the pond. The sensation was decadent, the movement of the warm water caressing her hypersensitive body. Then the water swirled behind her and she recognized the dragons had followed her in.

You didn’t expect anything normal did you? It is about dragons, LOL. 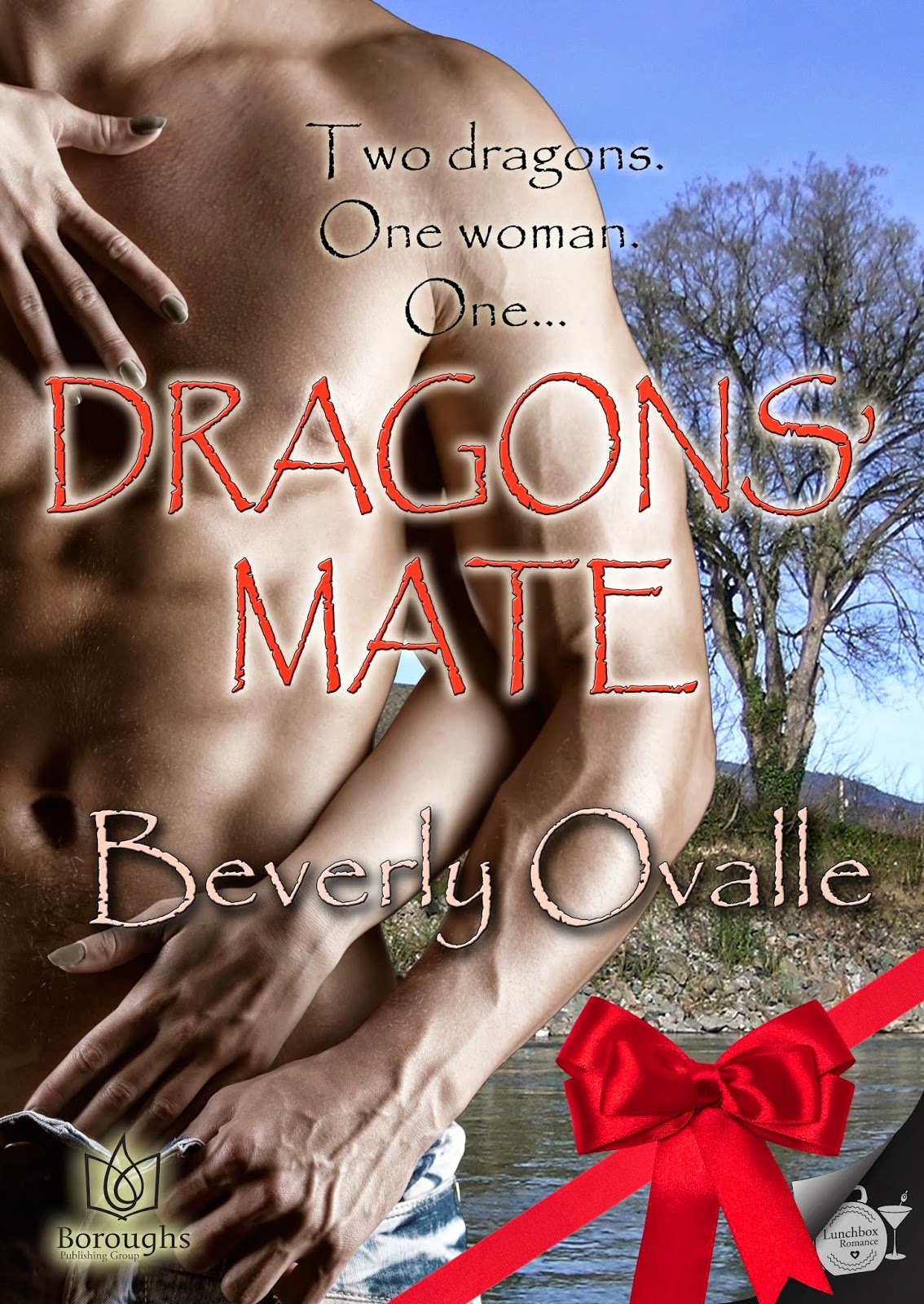 Releasing her nipple, he kissed his way down her body. He moved between the juncture of her thighs. Spreading her lips with his hands, he exposed her secrets to his view. 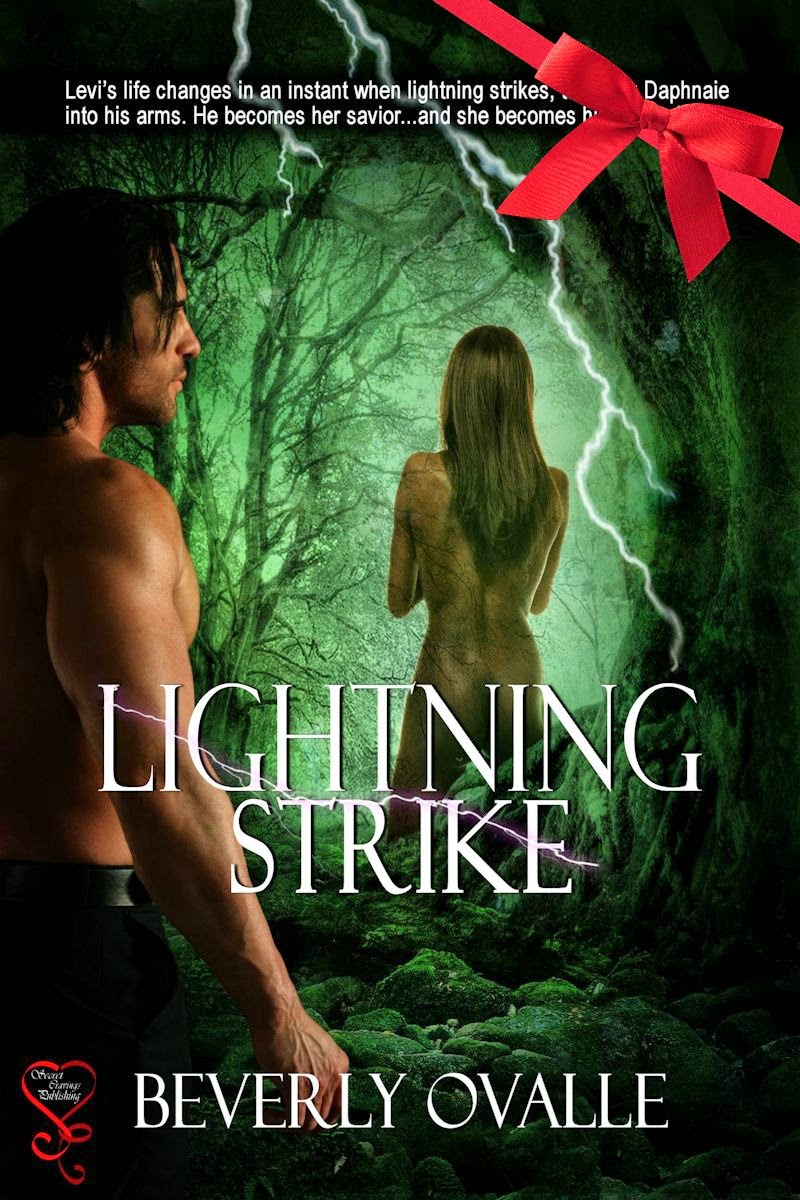 For generations Levi’s family had guarded a sacred glen in the mountains.  Still far from man this isolated area was a favorite spot of his grandfather.  Levi grew up listening to his tales and fell in love without ever having stepped foot there.

Now Levi’s family, led by his grandmother, wanted to sell the land.  With only his grandfather and Levi against it, Levi has to prove to the rest of the family why they needed to continue their guardianship.  Believing in his grandfather’s tales despite himself, Levi went armed with his camera and his well-known expertise behind the lens and headed out for proof.
Providing that proof and protecting the secrets of the glen from the world, Gaia needs to convince Levi to continue that protection.  Daphnaie, the embodiment of his every dream, is sent to show him why, stealing his heart in the process to save her world.
Buy Links:
Amazon: http://www.amazon.com/dp/B00GDW08LK
Amazon UK: http://www.amazon.co.uk/dp/B00GDW08LK
Barnes & Noble: http://www.barnesandnoble.com/w/lightning-strike-beverly-ovalle/1117308055?ean=2940045413466
All Romance: https://www.allromanceebooks.com/product-lightningstrike-1335710-149.html
Kobo: http://store.kobobooks.com/en-US/ebook/lightning-strike-4
Smashwords: http://www.smashwords.com/books/view/374674
Secret Cravings Publishing: http://store.secretcravingspublishing.com/index.php?main_page=book_info&cPath=4&products_id=745

TOUCHED BY THE SANDMAN

Oh don’t worry, he does more… 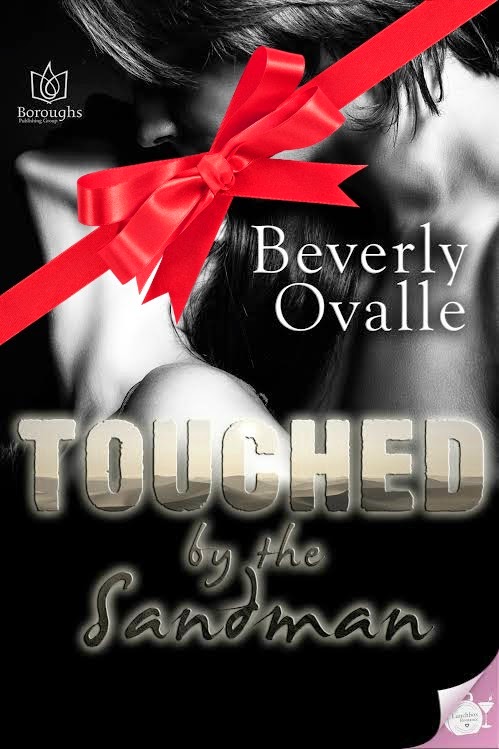 A lonely woman's torrid sexual dreams and fantasy partner await her as a dominant reality in another dimension.
The sandman visits those that need him, assisting them to sleep. Until one night he meets a woman that he cannot help but return to time after time.
She is lonely. He comes to her as she drifts off to sleep, the man of her dreams. Awake or asleep, which is her reality?
He knows she is the one meant for him. He will find a way to make both of their dreams come true.

Dan picked her up, his hands sliding over her luscious ass, wrapping her legs around his hips. Leaning in, he grabbed the throw blanket tossed across the back seat and flung it over the hood of the car. He laid her down as he tugged the edge of the blanket closer, making sure her body was on it. She wrapped her arms around his neck, pulling him toward her.
Kissing her, the sweetness of her lips distracted him as he pulled out his wallet, searching by touch for his emergency condom. Slipping his wallet back in his pocket, he tore the packet open, cursing as her hands grabbed, trying to assist him.

I think they had other things on their minds, LOL. 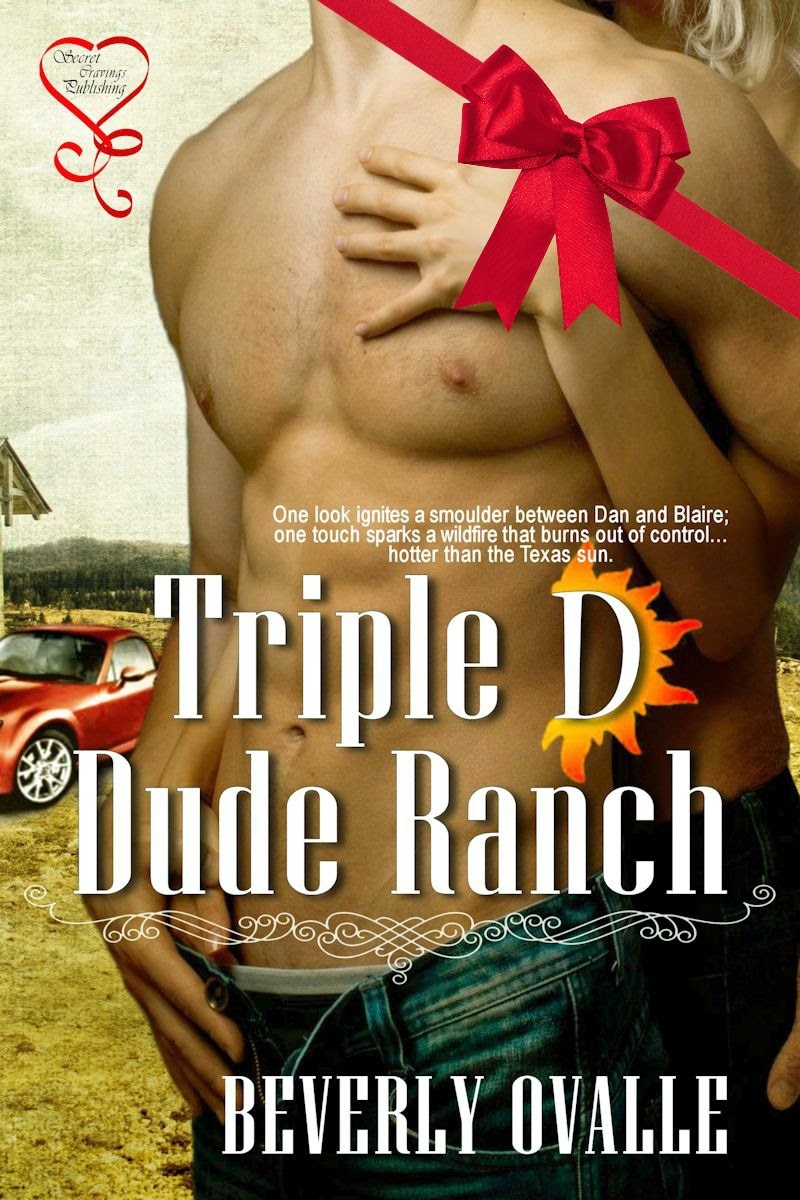 Blaire had gotten an exciting assignment, sending her from Chicago back home to Texas. She was taking pictures of a dude ranch for the Tribune, an up and coming vacation spot for the city slicker.  Blaire couldn't help the wildfire of desire that ran through her at the uninhibited cowboy she finds in the lens of her camera.

Dan remade his ranch, making it a go to vacation spot being featured in the vacation section in a Chicago newspaper. A freelance photographer was coming to take pictures for the article. Dan couldn’t believe the hot and sassy urban cowgirl that arrived, camera in hand.

Texas is hot as hell. But it is nothing compared to the fire that blazes instantly between Blaire and Dan. Just one look, one touch, Blaire was the spark and Dan was the tinder that fed those flames, sparking a conflagration that nothing can stop.

For the joy of the season one winner will get an ecopy of all my books listed above emailed to you in your preferred format!
(Mr. Random will choose the winner)

Please leave a comment to enter and let me know your favorite Christmas Cookie!
Make sure you also leave your email and preferred format (kindle, nook, or other ereader)

You can also win a chance to enter by signing up for my newsletter at  http://eepurl.com/-r58z

Follow the rest of the hop for more prizes!