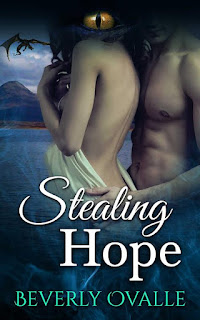 Volcanoes shake the land, stirring awake the dragons that live deep within its depths. Rising, awakened to a changed world, Ari heads out to explore. Mankind has been decimated. The earth once again green and growing. An instinct inside him is growing, one that can only be bringing him to the one person fate has created just for him – his dragon’s mate.

Attacked by wild dogs and minutes away from being a cougar’s meal while out hunting, Hope is suddenly snatched into the sky by a creature that can’t be real. Dragons are only real in myths and legends. Stealing Hope away, Ari doesn’t realize that she feels in greater danger from him. His only thought is to rescue his mate.

Hope injures the creature to escape. Her choice to be eaten or fall to her death in the waters below. Now shapeshifted to a man, Ari rescues her. Hope begs him to take her to her family not knowing he was the creature that stole her.

Posted by Happily Ever After One Book at a Time at 9:55 PM