Blogging from A to Z: Vampire 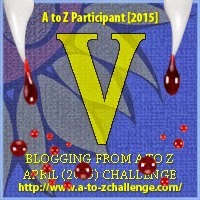 V is for Vampire
Since Bela Lugosi came on the scene as Dracula, Vampires fascinate our culture.
Check out all the info at Wikipedia!
Fascinating!


Based on the legend of Vlad Tepes also known as Vlad the Impaler a blood thirsty prince of Wallachia.

He however isn't the charismatic vampire that we have grown to know, and dare I say, love.

The charismatic and sophisticated vampire of modern fiction was born in 1819 with the publication of The Vampyre by John Polidori; the story was highly successful and arguably the most influential vampire work of the early 19th century.[2] However, it is Bram Stoker's 1897 novel Dracula which is remembered as the quintessential vampire novel and provided the basis of the modern vampire legend. The success of this book spawned a distinctive vampire genre, still popular in the 21st century, with books, films, and television shows. The vampire has since become a dominant figure in the horror genre. - http://en.wikipedia.org/wiki/Vampire

But those of us who read romance know that the vampire is not just a face of horror. He is a main staple in our vision of romance. Brought to our hearts in books like the Black Dagger Brotherhood, the Carpathians in the Dark Series and of course our big screen, toss our hands up in the air vampire we love to hate (and love!) Twilight.
Just they're just like us! Love baseball and everything!

www.beverlyovalle.com
Beverly Ovalle
Posted by Happily Ever After One Book at a Time at 12:00 AM