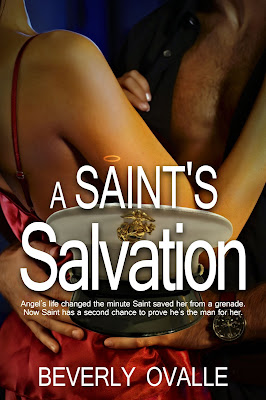 Corporal Nicholas 'Saint' Santiago needs to go home to reclaim the man he used to be. To be the man he was before Operation Enduring Freedom slowly hardened his heart. He needs to reconnect to the values and the reasons he is doing what he does. Saint also needs to try to forget the courageous woman he fell in love with.

Petty Officer Angelina Jones' life changed the moment Saint saved her life. She survived the blast but now has to deal with the fact that she will never be whole. She can’t believe that anyone would want her the way she is now. Digging up her courage, Angelina moves forward hoping against hope that she can live a full life again.

Crossing paths again brings their emotions to a full boil. A coincidence that will have them both reaching for their dreams.

This is a re-written and re-released novella! It has doubled in size and you now get to see Angel's POV (point of view). Saint just might not be as charming as he thinks!

Angel smirked at the look of eagerness in Saint’s eyes as she ran her fingers across his hardness. She laughed, closing the bathroom door in his face. Her abdomen clenched in desire. Angel tingled, wanting to once again feel Saint’s hardness filling her. If she let him in she wouldn’t get clean. The ache in her leg was another reason all together.

Angel needed a shower. Regardless of how tempting it was to have Saint come in and wash her back, Angel needed to do this by herself. She needed the heat of the shower on her leg, and she didn’t want to take her prosthetic off in front of him.

Angel flipped down the toilet seat and sat. She unbuckled the leg, grabbing it with both hands and setting it on the sink vanity. Next she rolled down the protective liner. Shuddering she gazed at what was left. Her leg was healing, though red scars crisscrossed her skin. Shiny in places and, Angel’s lips tightened, ugly, just ugly to look at. Bruises from her prosthetic marred her skin, the obvious grafts from multiple surgeries were plain to see.

Taking a deep breath, determined to keep her tears from falling from her stinging eyes, Angel tossed her liner on the vanity. Her stump tingled as her circulation once again flowed easier with the liner off. She didn’t want it wet. The others she had were in her suitcase, in her room. She wouldn’t, couldn’t let Saint see her without her leg. It would be obvious that she wasn’t a whole woman anymore.

Angel scowled and slapped his hands away. “Let me.” Angel slowly rolled down the liner on her leg, looking at him before she had it completely off. “Are you sure?”

Nick leaned over and kissed her. “Yes, now hurry up.”

Angel sighed heavily and rolled the liner all the way off. She kept her head down as she tossed it on the nightstand.

“Hmm.” Nick said nothing more until Angel looked up, uncertainty in her eyes before she once again dropped her gaze. “Well, it looks a lot better than the last time I saw it. It’s not mangled and spraying blood.” Nick heard a watery giggle. “It is naked. I like naked.”

Angel lifted her head and smiled at him.

Nick grabbed Angel and pushed her to her back, crawling over her, shuffling around until they both lay in center of the big bed, his knees between her spread thighs.