What is so fascinating about cowboys? I wish I could say. Could it be that they exemplify the image of the Old West? Europe had knights in shining armor, America has heroes in stetsons and boots. Wild and willing to tame the land and the ladies. Master of all they survey. Able to help and brave enough to save the day (or the cow - that was their job after all!)

A jack of all trades, the cowboy could survive on his own. Perhaps that is his appeal? A man's man and a ladies man too. They could and did any job put in front of them. Wicked hot from all of the work they performed, gentle with children and animals.

I know this isn't all true, but when I think of cowboys that is what goes through my mind. So, I had to write about one. Enjoy! Blaire is a freelance photographer on assignment. She is heading home to Texas, armed with her camera to do a photo feature for the Tribune. Taking photos of the dude ranch, she gets an eyeful of an uninhibited cowboy through her lens. The summer heat of Texas has nothing on the heat he generates in her.
Dan was expecting a photographer but not the sexy urban cowgirl that arrived. He knew it was hot out, he just hadn’t expected the hot and sexy woman to make him burn the minute he caught sight of her. One look and he had to quench this fire inside.
One touch between Dan and Blaire sparks a wildfire that burns hotter than the Texas summer and is just as hard to put out.
Excerpt:
She was in a white bandana halter from what he could see. Tied at her nape and waist, he could see her smooth toned back. Her hair was tied up in a pink bandana and Dan wondered how long it was. Her short denim cut off skirt gave just a peek at toned, heart shaped butt cheeks. His gaze traveled lower and he had to stifle a laugh. She had on four-inch spiked cowboy boots. Pink, no less.

Dan’s breath caught as she cursed and leaned over to pick something up off the ground. He had to wonder if she knew he was there. She took a deep breath and leaned over from her waist. He swallowed, mouth suddenly dry. Raising his binoculars he confirmed what he thought. No panties; not even the teasing peek of a thong. As she bent he had a perfect view of her ass and pussy. His cock grew, throbbing to come out and play. She either thought it was too hot for panties, or she liked to go commando. Either way Dan was appreciative.

She stretched further, spreading her legs slightly. Dan wanted to run his hands over the curve of her ass and sink into the delicate pink folds he was staring at. He stifled a grown. Her lips spread as she arched down with a groan, giving him an unrestricted view of her snatch, daring him to fill it. Her clit, which was nestled there, peeked out like it wanted to be noticed. Boy did he notice!

Dan sat there on his horse, cock aching as she moved. She twisted and turned with grace, giving Dan an eyeful. She paid no attention to her surroundings as she looked through the lens taking shots. Dan loved curves and she had them in spades. Not only did she have a world class ass and a pussy that was just begging to be fucked, but the bandana top she wore barely covered her. White, it was damp and clung to her breasts showcasing her pink nipples through the fabric. So large, they had to be triple-D’s. He swallowed.

Dan realized Mike’s warped sense of humor was why he said he had the perfect photographer. Shaking his head at Mike’s choice Dan grinned. Sending this particular bombshell with triple-D boobs to the Triple D Dude Ranch was right up his alley. Watching them quiver as she moved, Dan wanted nothing more than to latch on and suckle them until her nipples hardened and stood out. Dan groaned watching her, knowing he would have to call and thank Mike.

His jeans grew even tighter. Dan shifted on his horse, becoming more uncomfortable as he watched her. Fumbling, watching through the binoculars, he unbuttoned his Levi’s, hissing as he scraped against the denim as his cock sprang free. Letting the reins rest across his leg and making sure his horse would stay steady, he grabbed and fisted himself. Pumping, he imagined he was inside the pink glistening pussy of the wannabe cowgirl, he tightened his hand. 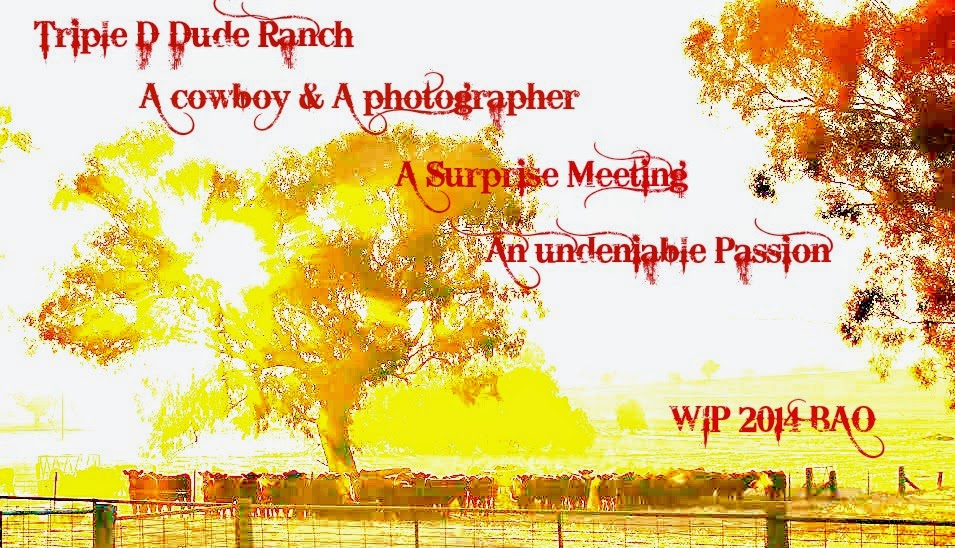 Posted by Happily Ever After One Book at a Time at 12:56 PM