No Heart Left Behind 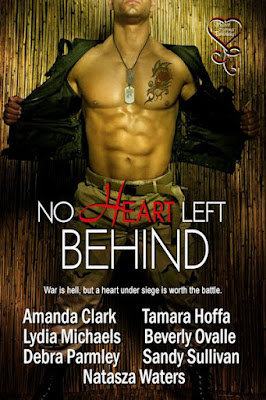 No Heart Left Behind

War is hell, but a heart under siege is worth the battle.

80% of the royalties will be going to Operation Troop Aid.

Love Me Forever by Beverly Ovalle

Staff Sergeant Liam McGregor doesn’t know what hit him. Sent home to recuperate from an IED blast, Liam is stuck in a wheelchair and is sentenced to surgery and physical therapy before he can walk again.

A physical therapist, Abby Worth has loved Liam McGregor since she first noticed boys. It’s too bad he’s her brother’s best friend. She has always been firmly put in the baby sister zone no matter how hard she tried to catch his eye.

Liam sees Abby and when she goes home with him doesn’t know how he can keep his hands off of her. She’s now old enough to touch and the fire in his blood and the combination of pain killers make him lose control. Abby can’t help but take what she’s always wanted.

Together they have to overcome their fear of being left behind to grab what they have always wanted-each other.

Davey returns to the small market town in the Lake District, on a mission. To claim the woman who rocked his world two years ago. He is in for the surprise of his life. Being a father to Jake has become his new objective.

Danni’s world was turned upside down the day she met Davey, after one hot and steamy week together, breaking her own rules. She is left with a permanent reminder, their son Jake. Danni let her past rule her future once before, will she do it again?

Now Davey has returned, Danni must conquer her fears, if she wants to win back the man she loves. But can Davey forgive her?

Will their love survive the secrets and betrayal?

When Marine widow Monica Montgomery’s son tore his ACL sliding into home plate, the last thing she expected to find at the base hospital was a second chance at love. But the six foot six orthopedic surgeon tempts her to play doctor.

Too bad her teenage daughter is hell bent on keeping the Navy Lieutenant Commander’s love boat anchored in port.

Dr. Jason Knight has patched up military men and women from Afghanistan to Okinawa. Now he faces his greatest challenge, filling the hole in the lives of this broken family.

Why We Go by Lydia Michaels

Sarah O’Neil has waited three long years for her husband’s return. With the end of the Civil War her circumstances are distressing and her trust in others beyond shaken. When a man she does not recognize at first glance approaches and knows her name, she is filled with fear. There would be only one reason for her brother in law to travel all this way. She is as she feared, a widow of war.

Jack O’Neil returns home to honor his brother’s dying wish, but the task is no chore as he’s always held a fondness for Sarah. As her sorrow threatens to consume her, he struggles to show her there is still joy to be found in living. His vow to stay and protect her is not easily accepted, but he is determined to show her how to love again.

Check Out by Debra Parmley

When Marine veteran Nash Ware walks into the library where shy librarian Betsy Bobbin works, she’s intimated by the handsome man who wears an eye patch and an attitude. Her car has a flat in a storm and Nash comes to her rescue. A fight outside a bar between an angry Nash and a drunk frightens Betsy. She’s fallen for him but is it safe to fall in love with a wounded veteran with PTSD?

Nash has found the girl of his dreams, but his wounds run deep. His ex-fiancé was repulsed by his eyes patch, and manufactured drama like bees do honey. However, real drama surround Betsy, when a stalker comes after her sister.

Betsy is torn. Will love and trust win out over her fear before it’s too late?


Love After All by Sandy Sullivan


SEALed with a Weekend by Natasza Waters


Blind dates suck, but a blind date weekend? In the forest! With a team of SEALs! Let the chase begin.

Vanessa Langara is the Chief Editor of Luna magazine. Pitching an idea for an article, her staff breaks new ground by inviting a team of Navy SEALS to participate in a blind date weekend. A call to N.A.B Coronado and a terse conversation with Lt. Seth McKnight, who makes it clear love is ridiculous, but agrees to the exercise, she prays the girls won’t be canoeing back from the San Diego high country in one day if they’re all like him.

Seth doesn’t believe in forever. With one divorce under his belt, women are the enemy. He wants to annihilate his best friend who tricks him into the weekend fling in the woods, but when he sets his eyes on Vanessa, there’s enough spark to start a forest fire.

No Heart Left Behind – reporting for duty September 19, 2015 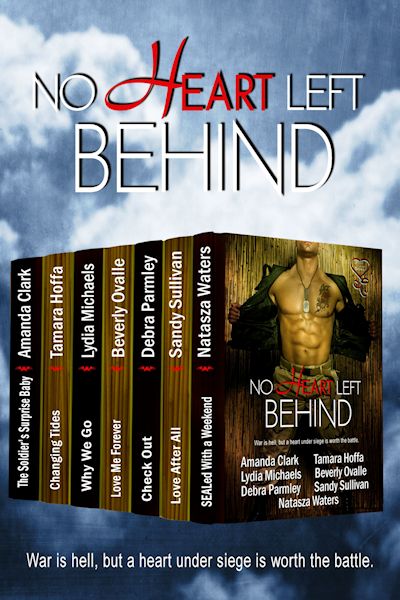 Posted by Happily Ever After One Book at a Time at 2:34 PM