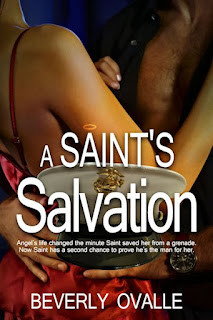 I'm rewriting A Saint's Salvation hoping to have it out later this year. The original story only was told from Saint's point of view. Now I'm adding Angel's.

Here's a snippet of her world. Unedited so bear with me!


Angel cursed the dust that seem to cover every inch of sick bay. She’d like one day where the first thing she didn’t do was have to clean up just to get everything all dirty again. There was a line sick bay, as usual. Minor injuries, sometimes the result of horseplay and sometimes they were more serious.

There were three corpsman that served on this little out-of-the-way base in Helmand province. She was one of the few women on the base and had actually been the first one to arrive. When she had finally convinced her parents that the Navy was her choice placating them with the fact that she was going into the medical field, Angel had no idea she’d end up in a combat zone.

She’d treated more shrapnel and gunshot wounds than she’d ever dreamed she would. She was proud to be one of the first women in combat, at least officially. There had been reports of women dying in combat since Desert Storm. The American people had turned a blind eye and ignored those deaths, pretending women hadn’t been out in front for decades. To be one of the first officially assigned to a combat zone was an empty honor.

Angel sighed as she heard gunshots. Hopefully they would not result in any wounds. She or one of the other corpsman would be called if necessary. The Navy corpsman had little to do with the scuffles around the perimeter of the base other than patching up the Marines.

She looked around sick bay. It was as clean as it was going to get. It was time to start calling in the first of the injured. She checked the sign in sheet and glanced at the waiting room. She’d go on order unless there was blood.

One Marine stood up and sheepishly followed her, limping as he walked. Great, she thought, this one was probably injured lifting weights. Rolling her eyes she gestured towards the examining room. Hardheaded every last Marine on the base had nothing better to do than lift weights and play pranks. This one had probably done both. Shaking her head Angel headed into the room behind him.

She heard the radio crackle as she entered. It was never silent. Sick bay kept it going just in case they were needed. There wasn’t always a Marine around to send to run to get a corpsman in case of a serious injury. The sound of gunshots echoed as a Marine screamed into the open channel.

www.beverlyovalle.com
Posted by Happily Ever After One Book at a Time at 9:48 AM